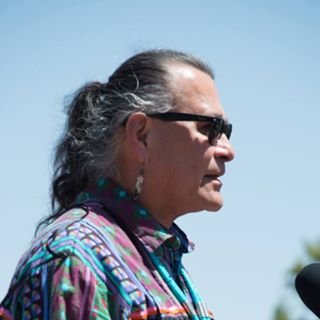 Newly retired from the Federal government after 31 years of public service as of June 30th, 2022 Ed is in the process of establishing the next phase of his career evolution.  He recently accepted a position with the George Washington University's School of Business and the International Institute of Tourism Studies to be the Indigenous Tourism and Economic Development Executive in Residence. He is also negotiating a similar position with Virginia Tech University.  I intend to continue my work with helping indigenous communities to build their capacity for sustainable economic development which reflects and enhances their cultures and traditions.  Tourism is the industry that I am emphasizing as that industry provides an opportunity for indigenous peoples to put their culture and traditions at the forefront and educate the world from their voice about their history, cultures and traditions and dispel the myths, misinformation and stereotypes that abound about us.  Tourism also provides a platform of visibility and advocacy from an educated public creating support for indigenous cultures to sustain their lifeways in the environment and ecosystems that are an essential part of who we are.  We are taught that we are one of Creator's creations on Mother Earth and as such we are related to all of creation and responsible for caring for our relatives to sustain and nourish life on Mother Earth.

He established a permanent tribal presence in the National Academy of Science, Transportation Research Board through the creation of a committee on tribal transportation issues.  That helped form the Inter-tribal Transportation Association which became an arm of the National Congress of American Indians and helped bring the funding level of the BIA, Division of Transportation from $100 million in 1992 to over $550 million in 2021.  He helped create and fund the American Indian Tourism Conference in 1998 which in turn created the American Indian Alaska Native Tourism Association (AIANTA) in 2002.  Further, he was awarded recognition by AIANTA in 2019 for his work as a founder at the 20th Annual conference.  He also created the tribal outreach program for the National Scenic Byways Program’s America’s Byways Resource Center.  I was awarded the Tim Wapato Public Service Award by the National Center for American Indian Enterprise Development in 2012 for my work helping Indian Country economic development.

In 2013 I was contacted by a friend who was working for Senator Brian Schatz from Hawaii.  She wanted to craft legislation that would support Tribal and Native Hawaiian tourism capacity building.  They interviewed me on my work with tribal tourism and created the NATIVE Act of 2016.  I became the lead staff for the Department of Interior on the implementation of the Act and we were subsequently funded to implement the Act in 2018, 2019, 2020, and 2021.

Because of my work with tribal tourism, I was asked to present to the Organization of American States (OAS) Ministerial on tourism in Lima Peru in September of 2015.  As a result, we wanted to establish a collaboration that would bring together indigenous peoples from the Western Hemisphere to discuss their opportunities and challenges in the tourism industry but moreover look at our shared history and the evolution of our cultures through our centuries of trade and commerce before contact.  We succeeded in getting Administration and U.S. Department of State approval to work together in 2019 and held the first ever Indigenous Tourism Forum of the Americas in October of 2020.  This is an ongoing collaborative between the BIA, OAS and George Washington University.  My new position with GWU will continue my work on this project as well as others established under the NATIVE Act.

I am the on the Executive Council of the Native American Food Sovereignty Alliance (NAFSA) as our indigenous food and medicine are the glue that binds us together through history.  It is our trade and commerce of food and medicine that shaped the journey and evolution of our cultures..  It is through them that we identify ourselves and through them that we can share who we are to others.  It is vital that in that sharing we establish the capacity to protect our intellectual and cultural property as well as environment and ecosystems so that our cultural knowledge is not misappropriated and abused.  The Collaborative is an arm to build the framework to assure we have the tools and resources to do so.