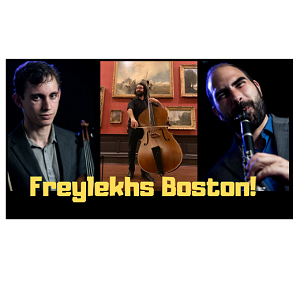 Klezmer band that brings passion, virtuosity, and contagious energy to every performance

As part of Ezekiel's Wheels, Freylekhs Boston improvises with the intimacy of chamber music and the intensity of a rowdy dance band. Their engaging contemporary interpretation of Jewish music is irresistible to audiences ranging from elementary school students to the judges at the International Jewish Music Festival, who heralded them as “a true musical democracy.”

Their unique style was forged in the subway stations and farmers’ markets of Boston, where the informal setting and ever-changing audience created an ideal environment for musical experimentation. They honed their craft with bulgars and 90’s pop covers for the morning rush hour and mixed doinas and zhoks with fresh produce on the weekends, building a community of fans and friends across the city. As their tightly coordinated but playful style matured, they moved on to larger and more discerning audiences, and in 2012 they won both the jury-awarded City Winery Prize for best klezmer ensemble and the Audience Pick Award at the third biennial International Jewish Music Festival in Amsterdam. This success opened a new chapter in the band’s ongoing saga that included high-profile performances at the Kennedy Center, the Shalin Liu Performance Center, and Yidstock. Over time, their repertoire grew to incorporate original as well as traditional instrumental tunes, and in 2017 it further expanded to include songs in Yiddish and English.