BALL IN THE HOUSE 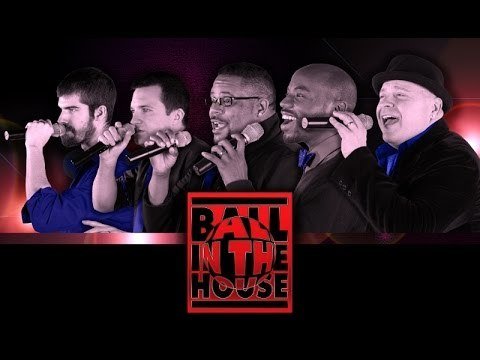 Ball in the House (BitH) is an R&B/soul/pop a capella group based in Boston, MA. With their extensive tour schedule (approx 200 shows a year), BitH has performed all over the country! They have performed with such artists as The Beach Boys, Fantasia, The Jonas Brothers, Gladys Knight, Lionel Richie, Jessica Simpson, Blondie, The Temptations, Smokey Robinson, KC & The Sunshine Band, and numerous others.

BitH has also performed internationally! In May of 2019, BitH participated in the Moscow Spring A Capella Festival. In 2016 AND 2018, BitH headlined the China International Chorus Festival in Beijing. They won the 2016 Boston Harmony Sweepstakes and was voted 2014 APCA Band of the Year. They also won 2009 Best of Boston for Outstanding Musical Performers. For six years, they were even the voices behind the Kraft Cool Whip commercials.

Ball in the House has appeared on The TODAY Show, America's Got Talent, The Daily Buzz, the Philadelphia 4th of July Parade, and many other television and radio shows. The Boston Globe says of the group, "Ball in the House has everything you would expect to find in a successful pop/R&B band...the one thing it doesn't have is instruments."

Most recently, BitH finished off an 8-week,14-state midwest tour in partnership with Allied Entertainment, and will be doing it again in the spring.

Learn more about BALL IN THE HOUSE.