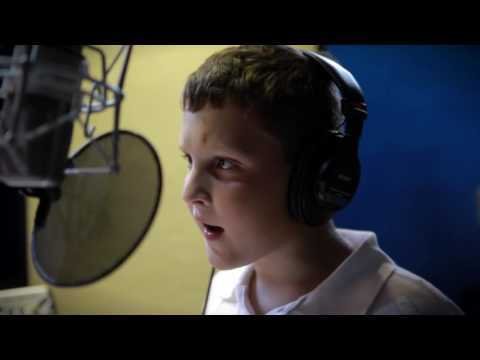 Kyle Mounce is a happy-go-lucky guy,” says his mother, Paula. “He feels like everyone he meets is his friend. He’s very sweet and very polite.”  The teenaged Kyle loves to sing, and is part of his school choir. He also sings at church and, according to his mother, “would love to be a singer, talk show host or MC.”

Kyle has a fraternal twin brother—who appears in the video—younger by six minutes and taller by many inches. Unlike his twin, Kyle was born with autism. Though he does well in school, he faces social challenges.

“He acts differently than his peers, and struggles with the fact that he is different,” says Paula. “He knows he’s autistic and we reassure him that he’s fine, and tell him that’s what makes him special.”

Kyle had always dreamed of making a music video, and was thrilled to get the opportunity. He was surprised by how long the process takes, and by many times he had to sing his song. The filming took all day, and he got to be interviewed on radio and television. In one interview when Kyle was asked whether it was stressful for him having to record the tracts over and over again, he responded, “You have to experience failure to be amazing.”