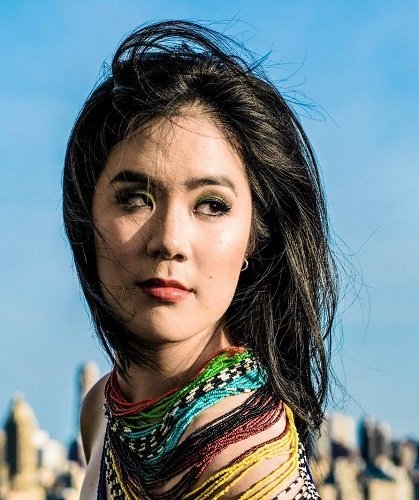 Stephanie Chou is a saxophonist, singer, and composer based in New York City.  Her music combines classical and Chinese influences with jazz and pop harmonies and rhythms. Raised in Irvington, NY, Chou studied mathematics and music at Columbia University. In 2011, she released her first album, Prime Knot, a jazz quintet CD featuring trumpeter Marcus Printup (Jazz at Lincoln Center Orchestra). Her 2012 ballet work “C for G” was commissioned and choreographed by former American Ballet Theatre principal ballerina and ballet mistress Susan Jaffe, and was premiered at Goucher College.

Steph’s 2017 album, Asymptote, features fresh takes on Chinese classics including "Kangding Love Song", "The Moon Represents My Heart", a tongue twister about "Eating Grapes", and a setting of one of Li Bai's most famous poems. Asymptote features jazz musicians Kenny Wollesen, David Binney, John Escreet, and Zack Lober, as well as viola and erhu virtuoso Andy Lin. The release concert was co-presented by China Institute in America at Joe's Pub at the Public Theater. She has performed her original music in Taipei, Taiwan and Beijing, China.  She has also performed throughout New York City at venues including Carnegie Hall, Lincoln Center, B.B. King's, Joe's Pub, Miller Theater, and The Cutting Room, as well as in festivals in Italy, New Orleans, Chicago, Vermont (Discover Jazz Festival), Pennsylvania (Musikfest) and NY (Summer on the Hudson, Harlem Festival of the Arts, Sunset Jazz at Lyndhurst).  In 2016, she released Compass, a duo CD with guitarist Octavia Romano.

She is a recipient of the 2016 Jerome Fund for New Music (JFund) - a grant from the American Composers Forum with funds provided by the Jerome Foundation to write, record, and premiere a new piece of music with China Institute, Comfort Girl. Comfort Girl is a musical exploration of the lives of Chinese 'comfort women' who were abducted into sexual slavery by the Japanese army during WWII. The work is a tribute to these young women’s incandescent courage and indomitable spirit, not only while in captivity during the War but also—in a cruel irony—when they returned home to their families, who didn’t always welcome them back with open arms. Comfort Girl premiered to a sold-out audience at Joe's Pub at the Public in March 2019.

She is currently working on a studio recording of Comfort Girl and other new projects with engineer/mixer/producer Roy Hendrickson, and also performs as a guest artist for workshops on leadership and jazz with the Columbia University Business School.