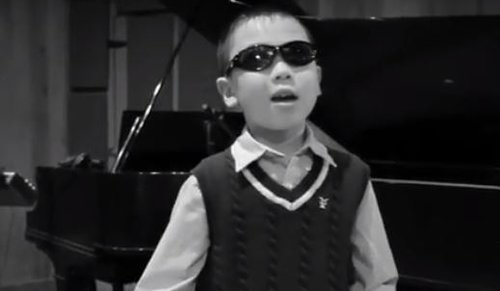 Tristen Chen is gifted with language, music and math. Only three months before his second birthday, Tristen lost his sight, the result of an eye-nerve development delay. His frantic parents were told by a Stanford physician, “Don’t worry. He will be fine.” And the doctor was right, according to Tristen’s mother, Renee Hu.

“He began talking very early,” said Renee. “At one year old, he could speak, and so when he suddenly lost his vision he was able to tell his grandmother about it.” As a toddler, Tristen’s favorite toy was an electronic keyboard. At the age of three, and with no instruction, he performed Yesterday Once More, a song by Richard Carpenter and John Bettis, playing with both hands on the keyboard. The parents took notice and got him lessons. Now in grade school, Tristen is a composing musician—and quite gregarious.

When Tristen got to play piano for his EIAS video, the result was not only a musical joy, but a social one. He was as much delighted by the experience as by the outcome. Every time he hears his video he gets excited. “He loves it,” says his mother. “It reminds him of the whole day he spent with Howard and the team.”