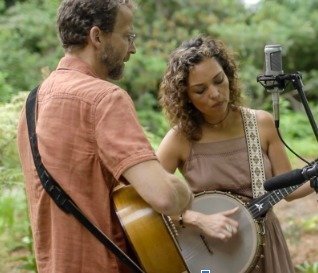 A roots-infused, Contemporary Folk duo, Crowes Pasture (Monique Byrne & Andy Rogovin)  performs original music and eye-opening covers that reflect a mutual passion, sense of discovery and celebration of life.  Their tightly blended vocal harmonies are mixed with an expressive instrumental style that is best described as a “banjo-guitar romance.”

In just five years' time, Crowes Pasture has quickly made waves with two EPs and three full-length albums. Their latest CD, "Slow It Down", was released in June 2019 at the legendary Club Passim. Since its release, the title track earned Crowes Pasture a #1 song, and the album debuted at #5 on the International Folk DJ Charts. They also had a #8 song for their cover of Mary Gauthier's "Mercy Now", a #23 song for their cover of Bob Marley's "Is This Love", and they were the #8 Top Artist for June.  2019 opened some exciting doors for the duo; they were a supporting act for The Kennedys and The Small Glories, and performed at a number of renowned east coast music venues including Club Passim, Shalin Liu Performance Center, Rockwood Music Hall, The Bull Run, and Circle of Friends Coffeehouse. To round out the year, Crowes Pasture  was honored with nominations as Roots Act of the Year in the New England Music Awards, and Americana Artist of the Year in the Boston Music Awards.  2020 didn’t start out too shabby, either, as Crowes Pasture was named finalists for Best Group/Duo in the International Acoustic Music Awards.