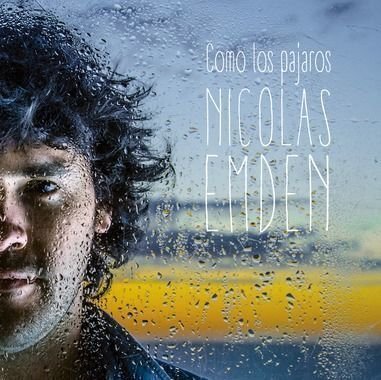 Spend a few minutes with Nicolás:

Between South America, The U.S. and Canada, Nicolás Emden has been part of many and very diverse artistic projects, all of which have managed to leave a mark on his music. COMO LOS PÁJAROS is the result of years of collective projects that went from folk music, rock, classic and contemporary Musical Theater into his journey at Berklee. This diversity of culture, music, people and styles brought in a project in which one of its main focuses is to connect people from all around the world, communicating in one only and universal language, music.

Nicolás Emden comes from the city of Osorno, Chile. He began his journey into music by the age of 6 singing and playing religious and traditional folk music from the south of his country. Between 2002 and 2014 he completed his first degree in music at Escuela Moderna de Música in Santiago and participated in several and diverse artistic projects, in which primarily are the Chilean Indie folk-rock band TEJADO PIMIENTO (2006-2012), with whom he published 2 studio albums (2007 & 2010), and participated in the famous TV program Garage Music 2008 (Canal 13) and the national Movistar Tour 2009. He also participated in different Music Theater productions in the professional music field of Santiago, as a music director, conductor and singer/actor. His first solo album was published in Chile on 2014 and produced by the renowned producer Claudio Quiñones. Its second single SOLO TENGO OJOS PARA TI is still programed in many radios of Santiago and other cities of the country. From this album also comes the Indie Documentary/Tour COMO LOS PÁJAROS X CHILE (2014), an 8 chapters YouTube documentary recorded on a motorhome one month travel, performing in public spaces of some of the most important cities of this country. Between those years, he was also invited by the Chilean-Canadian band COLOR VIOLETA (music from Violeta Parra, www.colorvioleta.ca), as a guest singer for lots of their concerts in Chile, Bolivia and Canada.

In 2014 he moved to the United States, to study voice, music direction and conducting for Musical Theater and other contemporary music ensembles at the prestigious Berklee College of Music in Boston. There, he had the chance to participate in world class shows with outstanding artists such as A.R. Rahman at the Boston Symphony Hall, vocal recording sessions with the Grammy-winner Irish composer Bill Whelan, and the Broadway hit Musical IN THE HEIGHTS performed at the Berklee Performance Center in November 2016.

"IN A SEPARATED WORLD LIKE OURS, MUSIC IS A LANGUAGE THAT CAN JOIN US BACK TOGETHER, FORGETTING OUR DIFFERENCES AND REMEMBERING OUR SIMILARITIES".