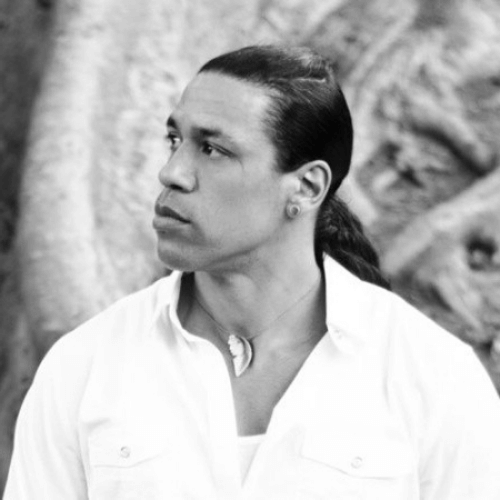 Born & raised on the Narragansett Tribal reservation in Charlestown Rhode Island, Annawon eventually made his home in his mother’s Wampanoag community located in Mashpee, MA.

Following in his father “Tall Oak”'s footsteps, Annawon began sharing the culture of his tribes with his family during public programs and performances at a very young age. As an adult, Annawon's passion for preserving the culture has been clear throughout decades spent working at Plimoth Plantation (Museum Interpreter/Outreach Educator) & Boston Children's Museum.

Although many have witnessed the accomplishments and contributions made throughout his journey , in October of 2016 Congressman James “Jim” Langevin took special notice and decided to commemorate the life efforts of Annawon, awarding him with a Congressional Honor as Culture Bearer for the entire New England region during the Tomaquag Museum Annual Honoring reception.  Annawon has found many ways to educate any audience. On stage or in the classroom, his ability to share his tribal culture has been sought after by many institutions such as: Smithsonian, National Geographic, Scholastic, PBS, History/Discovery Channel, Harvard, Nike, Reebok, & many other corporate, educational and environmental organizations.

Annawon Weeden is an enrolled member of his mother's Mashpee Wampanoag tribal community located on Cape Cod. He currently works in the MPTN Cultural Resource Dept. as the Eastern Woodland song/dance instructor for his father's Mashantucket Pequot Tribal community located on their reservation in southeastern CT. Growing up on the Narragansett reservation in south coastal RI, Annawon was instructed on the traditional dances & customs of New England natives throughout his entire life. As an adult, traveling abroad visiting many other tribes across the U.S., Annawon has developed a comprehensive understanding of the vast diversity among many native customs. Annawon looks forward to any opportunity to share his cultural knowledge with public audiences while engaging others in cultural preservation for future generations of better understanding.